In the News > 2022 Medicare Coverage Survey 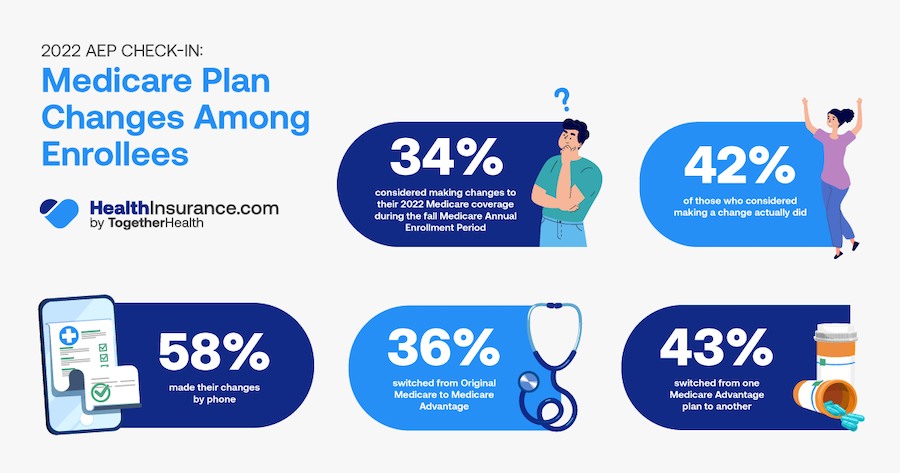 Setting health goals and making Medicare coverage changes in 2022 is a theme for many Medicare participants according to the latest HealthInsurance.com survey.

Our February 2022 survey reached 1,000 Medicare-eligible Americans ages 65 and up, asking about changes made to their 2022 Medicare coverage during the fall Medicare Annual Enrollment Period (AEP), which runs from October 15 - December 7 each year. The survey also gauged healthcare cost concerns, access to medical devices like hearing aids, and healthcare technology usage behaviors.

Other top highlights include:

While 75% are concerned about growing medical bills, a whopping 91% of our survey participants think vision, dental and hearing aids should be covered in every Medicare plan.

Key Finding #1: 61% think the COVID-19 pandemic has advanced healthcare technology, and 58% have embraced technology more during the pandemic.

While the majority do not use the gym as a means for exercise, 53% regularly workout through other activities like walking, doing virtual workouts, and using their at-home gym equipment.

The above survey results were gathered through a national survey of 1,000 U.S. adults ages 65 and older from January 23-26, 2022. Certain quotas were applied, and the sample was lightly weighted by geography, gender, race, education, and political party to reasonably reflect the 65+ population. Margin of Sampling Error: +/- 3.1 percentage points. 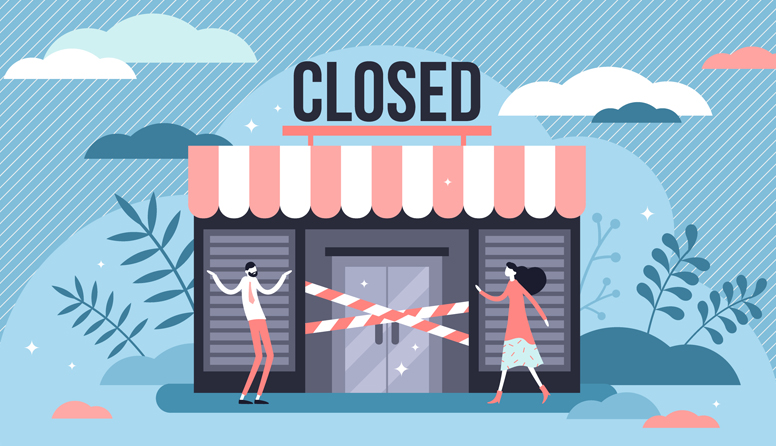 Jun. 01, 2020
How to Get Health Insurance If You've Lost Your Job During COVID-19
More than 6.65 million Americans filed for unemployment benefits over the last week alone – a bleak result of the Coronavirus pandemic. But those impacted aren’t just losing their jobs: They’re often losing their health insurance benefits too. And now is the time, especially, when health insurance may be extra crucial to you as you work to maintain good health or need coverage if you do get sick. Before weighing your options, take these steps: Know your budget and what you can afford each month. Make a list of your current health conditions and medications. List any doctors any healthcare providers you want to keep. Determine if you need dental or vision coverage. If you’ve lost your job and job-based insurance coverage, here are six options for you: 1. Join your spouse’s plan You may be able to obtain coverage through your spouse’s job-based health insurance plan, as long as your spouse or partner is already covered, which can be a cost-effective option. Ask your spouse to talk to his or her HR or benefits team to see if this is an option and what the associated healthcare costs may be for you. 2. COBRA You’ll likely receive a COBRA enrollment notice that includes information to continue your health insurance through your employer. Pros: You can keep your current health plan and continue to use your doctors and pharmacists under a policy you’re already familiar with. Your copays and deductibles will remain the same. Your spouses and children are eligible. Cons: You will likely face a higher premium because your employer will not subsidize the cost, and you’ll be charged a 2% administrative fee for continuing the plan. You can stay on COBRA for a limited time – typically up to 18 months. Some employers don’t offer this option, so be proactive and ask about it if you’re interested. 3. ACA (Obamacare) Plans Though the 2020 open enrollment period has ended, losing your job may qualify you for a special enrolment period exception. You can see if you can get coverage for an ACA plan through the Health Insurance Marketplace. Pros: Offers comprehensive major medical coverage for the 10 essential health benefits. You can’t be denied for pre-existing conditions. Tax credits are available if you meet the qualifications. Cons: You may not qualify to enroll in a plan at this time.* Can be costly if you don’t qualify for a subsidy. Plans can have narrow networks, so it’s wise to check if your doctors and providers are in-network. *Note: U.S. officials are also considering a special enrollment period to help uninsured Americans during the COVID-19 crisis. 4. Short-Term Health Insurance This type of temporary health insurance is designed to be a cost-effective and flexible insurance option if you’ve lost your job and have a gap in health insurance coverage. Pros: Flexible plan duration: Your coverage period can range from 30 to 364 days, with policy renewal of up to three years, depending on your state’s rules. Cancel anytime: You can choose how long you want to be covered (anywhere from 30 to 364 days). Plus, you can cancel your plan anytime. Enroll anytime: You can apply for and enroll in a temporary health insurance plan any time of year. And you can get coverage as soon as the day after you apply. Cons: There’s no coverage for pre-existing conditions. There are limits on prescription drug coverage: Most short-term health plans do not cover prescription drugs, but a few do offer add-on benefits and include prescription drug coverage after a deductible is met. There are limits on the number of covered doctor visits. Does not cover all of the 10 essential health benefits. You can be denied coverage. 5. Medicaid Medicaid is based on your income, family size and asset level. Though each state can set its own requirements, the limit is typically 133% of the Federal Poverty Level. If you do qualify for Medicaid, you’ll receive low-cost health insurance through your state which may cover you for: Inpatient care (hospital-type visits) Outpatient care (doctor’s office visits) Home health care Nursing care Dental, vision and hearing (in many cases) Again, benefits vary by state. And Medicaid should not be confused with Medicare (here’s how to know the differences between the two). 6. Telemedicine (not health insurance – but a way to get care) Though telemedicine isn’t a form of insurance, it’s a helpful service that people are turning to during a time of social distancing and stay-at-home orders. With telemedicine, you pay a monthly membership fee and, when you use the service, you may also pay a charge for the ‘televisit.’ Telemedicine connects you with virtual doctors who can diagnose and treat your non-emergency medical conditions, including: Allergies Asthma Behavioral and mental health services Common cold Fever Flu Men’s health issues Nausea and vomiting Pink eye Sore throat Skin conditions Sinus infections Women’s health issues Telemedicine doctors can also prescribe medications for certain conditions and submit the order to your pharmacy of choice. You can get a telemedicine quote with no obligation to you. We will continue to provide educational resources to you throughout the Coronavirus pandemic: Follow us on Facebook for news about COVID-19, telemedicine, health insurance and more. Visit our feed to get frequent updates on COVID-19 news.
Read More 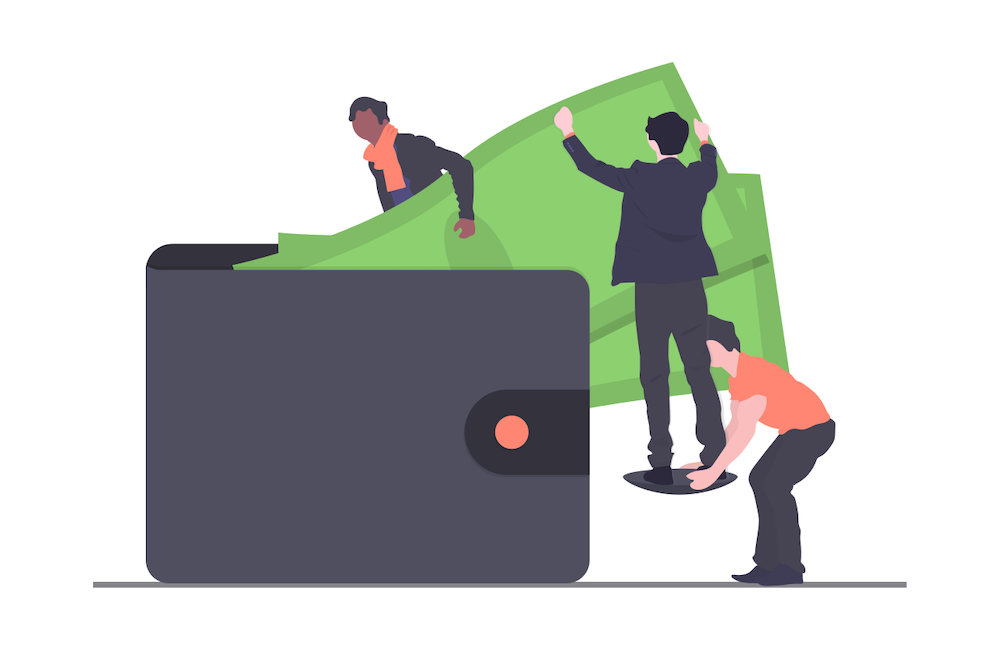 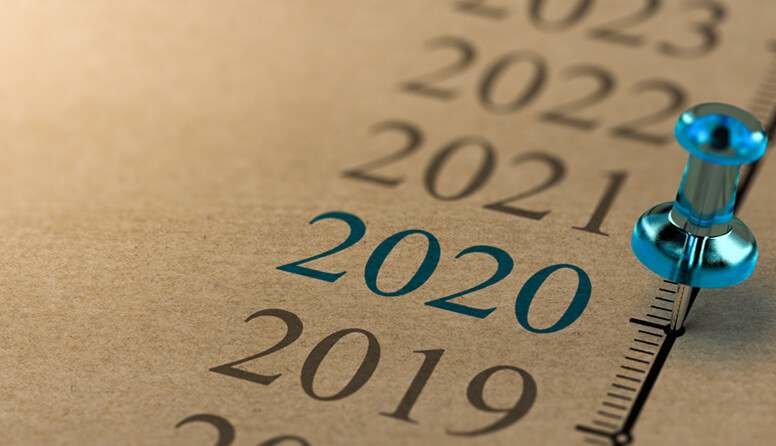